Today I got the life altering news that my dear friend Michael Hedges perished in a dangerous curve automobile accident in Mendocino California. The caller was Hilleary Burgess, Michael’s longtime friend and manager.

It was a day that had started with promise. I awoke, spun a bagel on my finger like Wyatt Earp and French kissed a soy-ed out cup of coffee. My Alabama girl friend had rushed off into the world in a floor length skirt to do temporary work at a fire department that had lime green fire trucks. Her destination was Riverside California, two blocks from the spot, now etched in my memory, where on the pale sidewalk outside of the municipal auditorium I was unknowingly to say my last face to face farewell to my friend Michael Hedges, there on the evening of October 26, 1997.  Michael was performing that night in a guitar summit with three other prominent players, Herb Ellis, Rory Block, and Sharon Ibsin.  As a little backstory I’ll add that earlier that morning, after coffee and cactus enchiladas, I set out to go to yard-sales in and about my Fontana weed patch. In doing so I came upon a little battery operated handheld T.V., displayed alongside of some lipstick smeared martini glasses and a taxidermized chihuahua, grouped black-comically on a rough corn colored horse blanket.  I didn’t really want it, but in the spirit of yard-sailing, I offered a pittance that I assumed they would refuse, but to my surprise they took it.  That’s what I always liked about yard-sales, they seemed like free admission to a one-act play, that while they were busy being joyous and humble, at the same time there was always the slight scent of downfall.  I could just picture the sun striking down on a car up on blocks, that isn’t there, but should be. After soundcheck that evening Hedges took me backstage to meet famed jazz guitarist Herb Ellis (Benny Goodman, Joe Pass, etc), where we were both reduced to kids in awe.  As we talked I noticed that Ellis seemed really sad, and questioned him if he was o.k.  He said that he was just a little upset to have to miss game seven of the World Series, between the Cleveland Indians, and the Florida Marlins.  I told him I was thinking along those same lines, that his lucky day was my lucky day, and handed him over my new salvaged T.V.  He seemed surprised at first but eventually lit into a smile, after he realized it wasn’t going to explode. He tuned into the game as we sauntered away.  Later, after the concert, Herb played me a few lines of Danny Boy on his sunburst Gibson, and told me, like he wanted me to know, that he played that song for his wife each night before they went to bed.  As I thanked him, I pictured him at home with a Chanelle bedspread, and grossly flattered myself to think that we were in any way even.

Michael was on his way into Los Angeles where later that night he’d study Yin Yoga in a garage with his teacher Pauli Zink (who also taught movement techniques to David Lee Roth and others). “Don’t bend anything I wouldn’t bend” were my parting words, and the words now that I peel from my memory like the adhesive side of a bumper sticker

Like every other musician, I have aspirations for myself high, and then those higher than reality. The world that Michael Hedges and Hilleary Burgess brought me into opened up a whole new wing of dream abilities. Hedges would at times drag me out onto stages right in the middle of his set to play my songs, to show me, I think, how joyous and blinding it looked from were he stood. He recorded my music, with us in duet, in his sequoia forest temple/studio. He worked around my eccentric time signatures excitedly, like a child, as if the mistakes were rather invaluable and ingenious creations. Watching him move his body in sway as he listened to the play back showed me the inner emphasis of my own life’s work. Right before anything began to feel like work we would take ample breaks for pesto burritos, dashing bike rides through the conifers, and sun drenched naps beneath ripe fruit quivering paradisiacal on the trees. An apple fell right into his outstretched hand one time and with wild flecks in his eyes he put on his most dastardly jabberwocky accent, “snake rattle and roll” he said. I wove the line into a song later that night over some sake martinis we invented, and the next morning we recorded it on fat 2 inch tape. 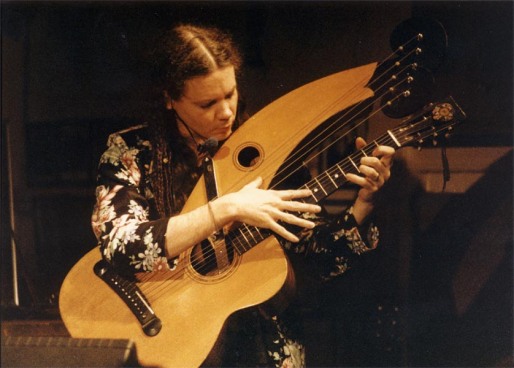 I was so proud to be his friend and of the influence that he had upon me that it was probably embarrassing for others to hear about. He called me on the phone in 1994 after hearing my “Catholic and Western Fabuli” collection and we became instant friends. He was born on December 31, 1953 and I was born on January 1, 1954, and those were I believe the kinds of connections that I think he took seriously, as I’m sure everyone wanted to be “a friend of Hedges”. I fear there is a mangled brunette BMW somewhere with my future still shaken, with a lot of my reason and influence still a slow spinning wheel and a slight smell of rubber. Nobody on this planet seemed more invincible than Michael Hedges, what a safe place to put your votive faith in permanence. 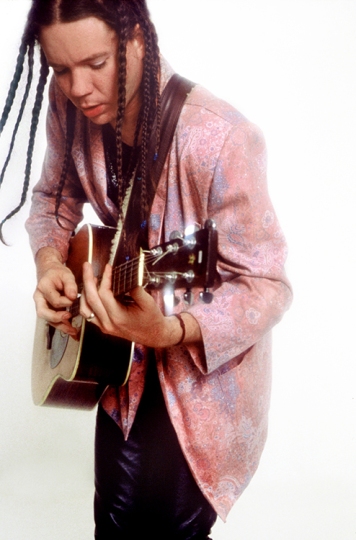 After hearing word of his winding road transition I angrily plowed a furrow in my garden and then broke down in tears and gently finished planting the row of sugar snap peas that I had started before the phone call. My nickname for Mike was ‘fabric boy’, stemming from a late night conversation we were having when we both admitted as to having an obsession for collecting fabric. He walked to the next room one time and strutted back with a strip of embroidered cloth which looked very expensive and of Pope’s robe quality. Or course my collection consisted more of random fake thrift store velvets and Guatemalan rags. But we both agreed that our obsession was more, not so much that we enjoyed the way the fabrics felt to the touch, as much as it was about how they made us feel inside. Those were the kind of warm realizations that he would, always the catalyst, help you weasel out of yourself.

You can do what you want to Michael Hedges, but he’ll always be burned into me dancing onstage like what I always believed to be Kokopelli incarnate. Tonight many a guitar player will cry on their calluses, many a hippie chick will howl in mountain hot tubs, and one family will see Michael Hedges’ face looking forward in their own children. My love goes out to that family, and to his musical soulmate Michael Manring, as my heart treads water for them tonight.